We are excited to introduce you to one of UrbanHalo’s very own for the newest addition to our Marathon Blog Series! Meet Ken. Or maybe you already have? Ken is one of our beloved event reps, bringing our halos to marathoners across the country and then often running alongside them on race day! Read on to hear about his incredible goal, favorite marathon to date and running advice for new marathoners!

My name is Ken Clemons and I’ve been a marathoner since 2008 when I ran the Medtronic Twin Cities Marathon. I got into marathon running when two friends who ran the TCM in 2007 told me I should join them next year. I said “Sure, why not?” The next year came and they bailed on me but I still went for it and completed it the day before my 44th birthday. Crossing the finish line is one of my favorite memories!! I actually ran a marathon! After that I was hooked!

I’ve been fortunate enough to be able to travel and decided to incorporate my passion (or is it addiction?) of running into my travels. I have several classmates and friends who have moved all over the U.S. so I’ve traveled to Seattle, Las Vegas and New Orleans to see or run races with them. This eventually led me to a goal of running a race in all 50 states!
Originally, I thought any race would count towards my goal but then I was talking to my friends and they said it should all be marathons and you should do all 50 in your 50’s. 50 marathons in 50 states in my 50’s? I liked the sound of it. It meant I would have to redo a couple states but so what? 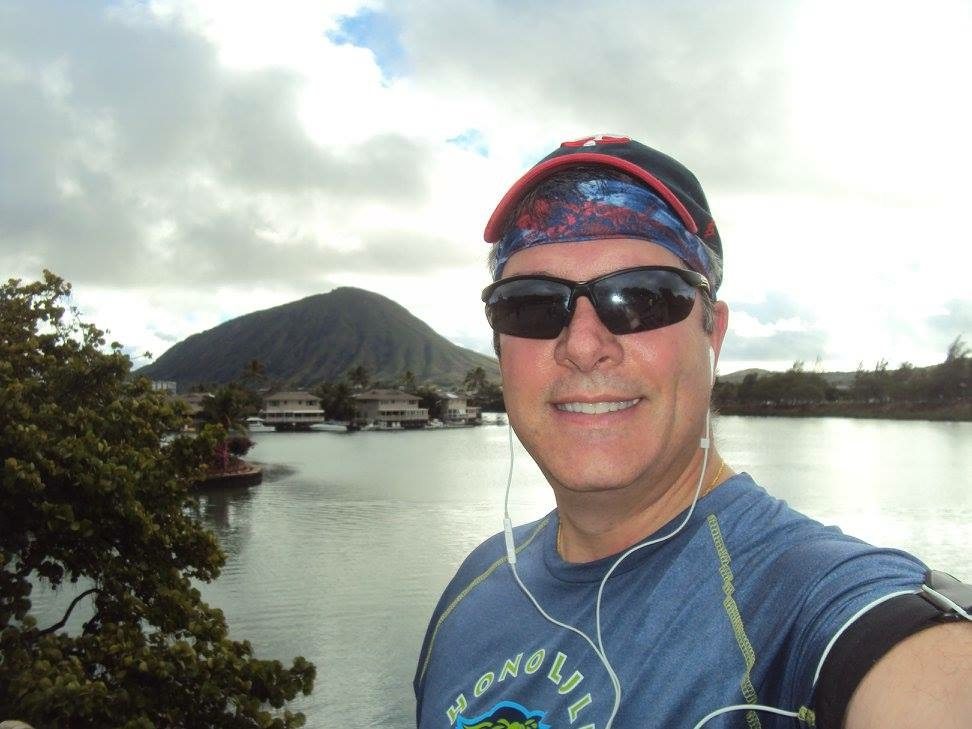 The first marathon in my 50’s was the NYC marathon November of 2014. But let me back up for a moment. I had won entry into the 2012 NYC race but because of Hurricane Sandy they canceled the event basically the day before it was supposed to happen, which they should have done a week earlier in my opinion. Since my parents, girlfriend and I were already out there, we purchased flash lights, batteries, energy bars, wet wipes, cleaning supplies (about 3 bags in total!) and my girlfriend and I took the ferry from Manhattan to Staten Island with a couple hundred other marathon runners. We ran a 6-mile course to a high school which was a drop zone for supplies. The damage was intense! Trees and power lines down all over the place, houses flooded, it looked like a war zone in places. Helping out like this meant more to us, not just because we were still getting a run in, but because we were helping those in need. Many other runners still ran a marathon by running loops in Central Park. I believe our group had the right idea… Anyway, since the race was cancelled I had automatic entry into the 2013, 2014 or 2015 marathon! I chose to run in 2013 so we went back again and this time the race happened. It’s my favorite marathon so far. I love NYC! Running through all five boroughs was amazing, plus there are about two million spectators along the course!!! If you get a chance to do this race I highly recommend it!!! I apply every year and made it back again in November 2014 alongside 50,000 other runners which made this race the first one in my 50’s. A perfect way to start.

So far, I have 10 states and 1 international marathon completed (it would have been 11 states but due to severe heat and humidity the Nashville race was shortened by 4 ½ miles GRRR) and around 7 ½ years to complete it. I need to pick up my pace (pun intended) to complete my goal. I need your help!! So this leads me to asking you, our faithful UH consumers, what has been your favorite marathons/races to run and where are they? This is a question I always ask runners when they come to my booth at the expos. It’s been my pleasure to learn what races our customers recommend and since I’m always looking for new states to travel to, this helps me bring our UH booth to your area and then run the race!!
So far, I count 22 marathons, 2 – four-person marathon relays completed, the marathon cut short by 4 1/2 miles and a four-person marathon canceled due to severe weather. I didn’t think I had run that many but I guess I have!
For first time marathon runners, I have some advice for you. Training is very important as well as nutrition, enough sleep, good shoes, listening to your body, surrounding yourself with a great support team (my doctor and chiropractor both are runners), but most important is your mental attitude. If you put your mind behind it you can accomplish anything and do it with a smile on your face (and an UrbanHalo on your head!). Thanks for all your suggestions and reading about my marathon journey so far! I look forward to bringing a booth to your area.