I am SO SO crazy excited to announce our InstaParty winner! But before I do… I need to announce the final addition to our grand prize!!

You know how you meet someone and you feel like you have known them forever?? I had the pleasure of that experience with a lovely “new” friend recently. Not only do we have our faith, motherhood, and running in common…but she is also a mompreneur; launching a brand new company, Sweat House Brands, with products I am CRAZY excited about!

Let me introduce you to Patty! Patty has a sparkle in her eye, a magnetic personality and a drive to succeed like few that I know. She also, like many of us, is not a fan of stinky workout gear :). So, she came up with a solution that gets the funk out… 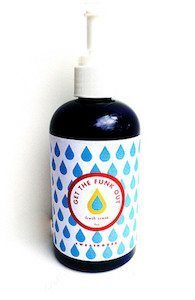 As a girl who has learned a ton about technical fabrics over the past few years, one thing I hadn’t learned yet, was that although they are fantastic for keeping us feeling dry during a sweaty workout, those synthetic fibers are a breading-ground for odor-causing bacteria. After tossing more expensive workout gear than Patty could stomach, this girl created a solution!  Get The Funk Out keeps your gear from smelling funky in the funkiest of places. Too often workout gear is ruined because of a funky odor caused by bacteria that is trapped in the fabric. Anyone who’s ever worked out in synthetic fabrics knows what sweat does to them. Ten minutes in and you smell like you just ran a half-marathon. When you’re done, you go home and throw it in a pile of laundry to be washed later. Bacteria loves it when you do that. You could wash it right away, but who wants to do a load of laundry after every workout? Spraying Get The Funk Out on your gear after every workout freshens your clothes and inhibits that bacteria growth, preventing the funky smells from settling in between washes.

In a few weeks Patty will be kicking off a kickstarter campaign to launch her business… way exciting!  You can keep up with that as it launches on her facebook page. So this is an amazing opportunity to get your hands on this funk fighter before it even hits the market! TOMORROW morning, we announce our winner!I Put this spray to the ultimate test. I have an adorable son, who plays high school football…and smells less than adorable after practice. I mean his stuff, “roll down all the windows on the way home so you can breath”, stinks. So badly that he is not allowed to wash his gear with anyone else’s clothes, because as Patty confirmed, that smell is forever trapped in those compression shirts! So, this week, we sprayed his gear down with GTFO and I’m telling you…customer fo’ LIFE. I wonder if he would mind my sharing about his stink on the internet?? Or calling him adorable? Or posting this picture of him? Eh, act now, beg for forgiveness later, right??

In a few weeks Patty will be kicking off a kickstarter campaign to launch her business… way exciting! You can keep up with that as it launches on her facebook page. So this is an amazing opportunity to get your hands on this funk fighter before it even hits the market! TOMORROW morning, we announce our winner!